Fighting a Traffic Ticket in Texas

So you’ve been pulled over and received a ticket. This can be a real drag on anybody’s day, and you may want to fight the ticket. Fighting a ticket can be difficult so we’ve outlined when you should try to fight a traffic ticket.

Is it worth it?

The first thing when considering fighting a ticket is to ask yourself, “is it worth it?”. Fighting a ticket requires considerable time with visits to the courthouse and it may not be worth it in the end. However, if a ticket means a considerable increase to your insurance premiums, it may be worthwhile to try your luck in court.

What Law did You Break? 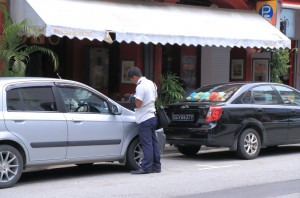 Before contesting a ticket in court it is important to know the law that you allegedly violated. Many police officers will not know the exact letter of the law and you can use this to your advantage. An easy way to fight a traffic is to read the exact law that you broke and break it down into elements. If you can refute a small portion of the law in your conduct you could show your behavior didn’t meet the exact prohibitions in the law.

However, in most cases you will have actually committed the crime and the officer will have some form of proof. Which leads us to our next piece of advice.

Most jurisdictions will offer students the option to attend traffic school or another similar diversion program. The cost for traffic school is often comparable to the cost of the ticket you received, however there will be no increase to your monthly insurance premiums. Traffic schools can either be taken in-person or through an approved online course. Drivers are typically only allowed to take the diversion program for their first traffic violation.

If you don’t want to take traffic school or if you are ineligible you could take your chances in court, and hope the issuing officer fails to show up to court. If the officer doesn’t show up you will typically win automatically. You can better your chances of an absent officer by, postponing your court date.The courts will often assign the issuing officer to multiple cases on the same day as a convenience. This way the officer doesn’t have to show up in court every day. A later court date will decrease the chances of the officer coming to court. Additionally, if you schedule your court date for closer to the holidays or summer vacation you might be able to beat it.