Am I Always to Blame for My Dog Biting Someone?

When they say that “dog is man’s best friend,” it’s a little shocking just how true it is. The relationship between humans and dogs has literally shaped the evolution of an entire species. Tamed down from wild wolves over hundreds of generations, dogs are now so closely bonded with humans that they do things with humans that they do not do with any other animals.

That’s why it can be so horrifying when your beloved pet attacks and bites another human. It all happens so fast, but before you know it, you have a dog that for some reason felt the need to attack, and an injured human.

Who is really at fault, though? Was the dog antagonized, or was it the aggressor? 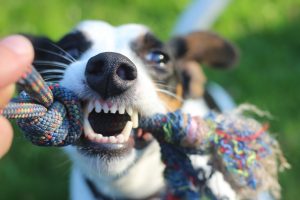 It’s a sad truth that animals sometimes attack. In fact, in the United States, it’s estimated that there are roughly 5 million dog bites each year, of whom 60% of the victims are children. It is the responsibility of the pet owner to ensure that their dog is not a danger to anyone around them, but that is not always possible.

In cases of self-defense, it is usually fairly easy to prove that the animal was acting in its owners’ best interest, but things get much more complicated when children are involved. If the owner of a dog makes every effort to keep the animal safely away from others (fenced in a back yard, for example), puts posted signs warning others about the presence of a dog, and warns those who actually approach the dog, then they are usually able to argue that the person who got bit was the one really at fault. This is called “contributory negligence”.

The vast majority of dog bite attacks, however, do not happen that way. An animal will break out of a weak enclosure to chase animals or children around the street, neighbors will be completely unaware of the presence of a dog until their child wanders into the other yard, a friendly pet can be agitated by noises and activity, etc.

The simple fact of the matter is that if protecting one’s self from a dog bite was an easy thing, there wouldn’t be 5 million incidents a year.

If you or a loved one are facing a dog bite incident, do not hesitate to get in touch with a Texas dog bite lawyer today. You undoubtedly have pressing questions, and you may have legal options as well.